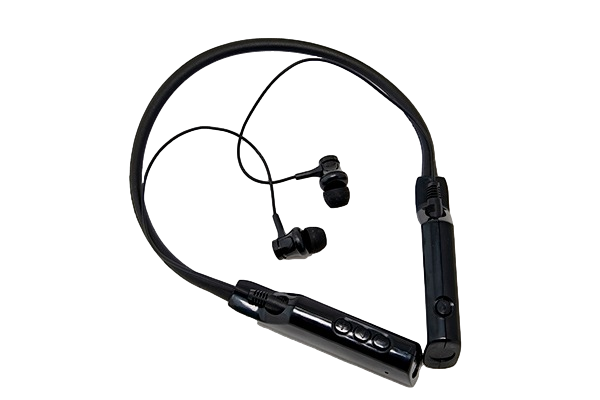 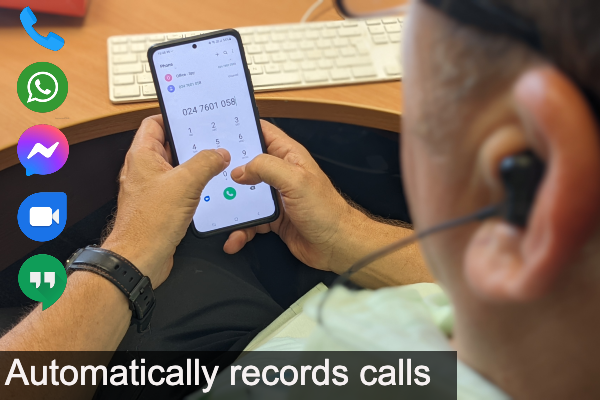 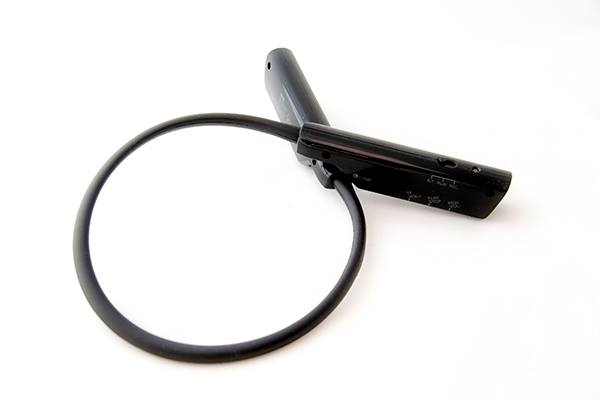 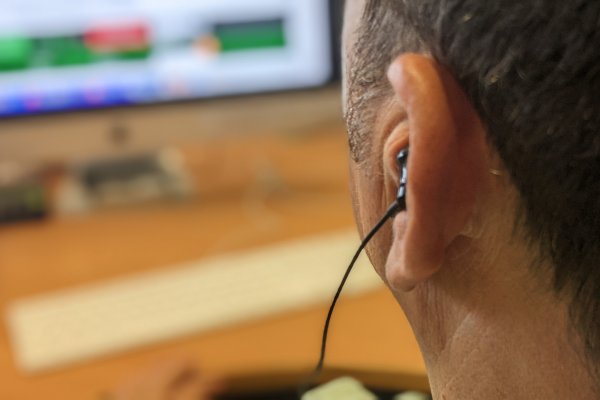 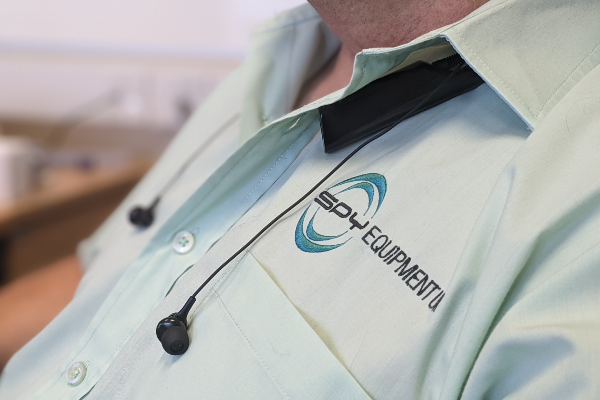 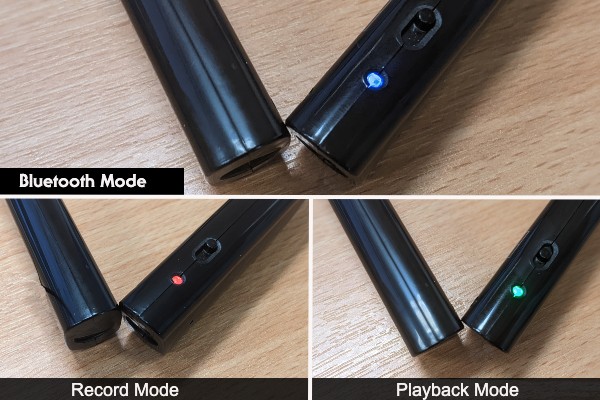 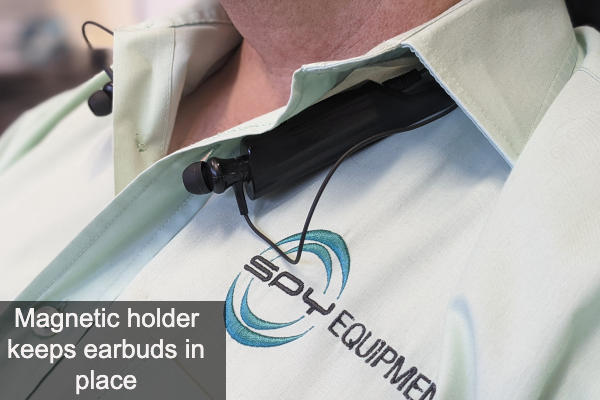 The Bluetooth Neckband Phone Call Recorder is the prefect solution for those needing to record their mobile phones throughout the day either for work or their own personal circumstances. Handsfree, comfortable, easy to use and with superb battery life, you can record calls on the go with no hassle

If you've got a question about Bluetooth Neckband Phone Call Recorder then please fill out the form below or call us on 024 7601 0588. Sometimes, but not always, your email maybe be answered outside UK weekday office hours.

All parcels are discretely packaged and addressed with no mention of Spy Equipment UK or Spy branding. All parcels must be signed for and can't be left at a property without a signature. No shipping is required for Software/Subscription Products

Order in the next hours for expected UK delivery before 18:00 on Thursday 11th August

This bluetooth automatic call recording system is designed for those who run their business primarily over the phone and have a need to record all calls for back up, training or legal purposes. A reasonably priced excellent quality solution for everyday call management and more…

Some businesses primarily run their client interactions over the phone with contracts and agreements being actioned in this manner too. As a result it is imperative that these phone calls are recorded. Larger companies with teams of sales people sat at a desk quite often use an expensive server based system, to automatically make recordings but smaller businesses have to consider other less expensive methods to record phone conversations. Recording using inbuilt apps on the phone will result in a periodic beeping sound, heard by the other person, to indicate that the call is being logged. The Bluetooth Neckband Phone Call Recorder provides the perfect balance between the need for a reliable, efficient and effective recording solution, but at the right price in reach of even the smallest business.

Designed for Longterm Use – Comfortable and Handsfree

Most bluetooth headsets are designed for extended use, but have no built in recording facility. This product is made to do both without fuss. The main part of the recorder which incorporates switchgear, batteries, etc., has been fashioned into a lightweight neckband. It can be worn very comfortably around the neck, being flexible enough to suit everyones body type. Connected to this band are a set of lightweight earpieces, one for left and one for the right ear. When not in the ears, these can either be allowed to hang down or, as they are magnetic, can alternatively be attached to their respective ends of the neckband, keeping them tidy and less prone to snagging when not in use, but still around the neck. The whole system is only 44.5 grammes in weight which means that it can be worn throughout the working day. You can almost forget that it is there!

Simple to Use – Automated Recording Operation

This device is pramrily used for recording phone calls when connected by bluetooth to a phone. It also can be used to record what is happening in the surrounding environment, so effectively can be used as a room recorder, with simply the slide of a switch to change from the call recording opertion. Recordings made during calls or surrounding environment can be played back through the earphones which makes it easy to undertake a quick review of what has been captured. Alternatively, the Bluetooth Neckband Recorder can be connected to a computer using the supplied USB lead and then recorded files can be offloaded/played in a more controllable manner. Setting up the bluetooth connection to a phone is straightforward and once a connection has been established between the two, each time the recorder is switched within 10 metres of the phone the connection will re-establish, unless the recorder is in a different mode or the battery on either/both is too low. Once the connection is made then subsequently each and every call made via the mobile phone is recorded automatically onto the memory of the recorder. This of course providing the recorder and the phone are within the 10 metre connection range.

After setup on a PC each and every time a recording is made the file is given not only a nubmer, but also a time and date reference, which is perfect for to help establish certain facts. If there is any controversy over a phone conversation in relation to what was said and when it was said, then the Bletooth Neckband Recorder will give you the support and provide the evidence that you need to help resolve the matter under dispute. A full battery charge only takes 180 minutes, after which the device has a standby time of 20 days, a general recording time of up to 30 hours or an in cal record time/recording playback time of up to 10 hours, the latter being more than ample for the average working day. Dependant upon the recording qulaity chosen, with 8GB storage, up to 288 hours of actual recording storage is available (144 hours if in XHQ mode).

Quite often call recording solutions such as mobile phone apps are only able to record one side of a conversation. The Bluetooth Neckband Phone Call Recorder is able to record both side of a phone conversation with excellent clarity and with no background beeping or annoying alerts. The device is Windows and Mac compatible for offload/playback of recordings, albeit setting the time and date is far simpler on a Windows PC. Supplied with USB connection lead, two sises of earbuds and of course an instruction manual this product provides an excellent quality solution for small businesses and others who need a slick call recording solution at an economical price point.

How do I listen back to the recorded files?

Simply play recordings through the connected earphones or by connecting to a PC or Mac computer to transfer and playback.

Do I need any specialist software to playback the files on my computer?

No, the Neckband Call Recorder is just like an external flash memory device, so will use the incorporated media player on your computer rather than having to install something extra.

Will the person I am talking to know that I am recording the call?

I have a tablet phone. Can I also record my calls on this?

It will certainly be possible to do this as long as the tablet has bluetooth and of course is able to make calls. Bluetooth should be a standard feature, but quite often the tablet has no SIM card.

How far away can the mobile phone be located from the Bluetooth Neckband Phone Call Recorder and still be able to record calls?

As long as the two connected devices are within 10 metres then call recording should be possible, although under normal circumstances you would expect the person using the device to have their mobile phone in their hand anyway.

Does the battery run down as quick if the recorder is not recording calls or room recording?

The standby battery life is actually up to 20 days, albeit this is reduced to only 10 hours of in-call recording. Recharging of the batteries is very quick.

Is it possible to record what is happening in the room and also record calls at the same time?

It is NOT possible to do both at the same time, but it is simple to quickly switch between the two modes if desired

CONTACT US
X Close
We use cookies to ensure that we give you the best experience on our website. If you continue to use this site, we will assume that you are happy with this.AcceptPrivacy Policy