In our last spy histories, we detailed how spying has helped with a whole plethora of happenings, most notably wars. Sometimes spying is used in honourable ways for righteous causes, like the prevention of evil, the way our equipment is used. However, it’s not always that way.

Due to the power that it yields (consider just how covert hidden audio recorders are!), spy equipment is obviously also used for a lot of abhorrent causes. One very, very interesting example of this is the Rajneesh movement. Being a movement many, quite surprisingly, don’t know, we’ll give you a little context on who exactly they are. 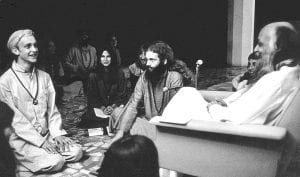 These introductions are usually rather easy; you don’t have to explain WW2 to most. The Rajneesh movement, although, is evidently much lesser-known, but it’s a tale which holds just as deeply interesting happenings. Happenings of evil, spying, and cult-like worship.

During the midst of the new age movement, a spiritual leader by the name of Bhagwan Shree Rajneesh cultivated a mass following. He did this after he revolutionised the thinking of many with his seamless amalgamation of Eastern mysticism with Western capitalism. This following didn’t simply adopt his teachings in their day-to-day life either, they came to roost at his ashram in India. There they wore only red clothing as per his instructions. And not only that they engaged in cultist meditation, as per his instructions. Oh, and they carried a necklace with his face in it. To put it simply, they creeped out the entire world, as per his instructions.

Not only did he get these followers to move to India, he also got them to empty their pockets, too. Always voluntarily, of course. The clout the man had was unbelievable. As the Rajneeshee Foundation was listed as a religious/spiritual sect, they didn’t pay tax. And as they were generating huge revenue from consuming rich westerner’s identities and also their wealth, the Indian government weren’t happy. He was effectively ostracised – at the time it was masqueraded as them wanting to upgrade their living quarters. So they moved to America. 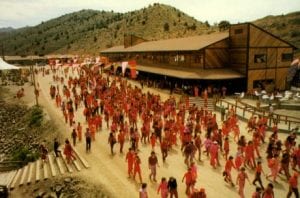 Eventually settling in Oregon, they built a commune. A very big commune. They had an airport, homes for thousands, three office blocks, mansions-of-sort for Rajneesh and his secretary, Ma Anand Sheela, and much more. The small neighbouring city of Antelope was not happy. They thought they were losing what they considered home.

One of Bhagwan’s key teachings was sex is a divine thing and it must be embraced on our path to spiritual enlightenment. So his followers did. This is why, these days, the Rajneesh movement is known as a sex cult. Oregon, a hardline Christian location, had a pathological opposition to such teachings.

The shenanigans – building a city, free sex movement, cultist meditation – irked the locals and they began attempting to stop the Rajneeshees from growing. So the commune acted back, rather aggressively. In fact, in order to influence an election they poisoned an entire city with salmonella. It is still considered the largest act of bioterrorism in US history. Things inside the commune got tenser, too. Which led to Bhagwan’s leading secretary, Ma Anand Sheela, becoming very paranoid; worried that certain followers were out to get her and Bhagwan.

And thus began the biggest account of wiretapping in US history. Ma Anand Sheela placed bugs in every single building in the commune and recorded everything, including Bhagwan’s home where he held private talks with other followers. After the officials got involved and found where Ma Anand Sheela stored these recordings – down several floors and through 7 secret doors, encountering a hot tub on the way – they said it would take someone working 8 hours a day, 7 days a week, for two years to listen to the entirety of them.

Paranoia. It was pure paranoia. But, as said, it was the biggest count of wiretapping in US history. If you want to learn more about this story – we implore you do, it’s great – watch Netflix’s new documentary, Wild Wild Country.

Other Spy Histories to Catch Up On!

We have produced several articles in our spy histories series. You can read some other spy history excerpts today. Discover an article in which we ask the question Who is the Most Important Spy of all Time? Another spy history and politics article that gets you thinking is Alternate Realities: What if Thatcher had Spy Equipment?

A fiercely interesting tale, that one. If you’d like to buy any spy equipment yourself, take a look at spy equipment, such as our tracking devices! For a little guidance on which products have been a huge hit with  people, check out our Top 10 Bestselling Spy Shop Products. Any questions about the article or our spy products, find our contact details and drop us an email or give us a quick call!